Spaz was originally thought up by Nick Stadler. While drawing an exaggerated drawing of Jazz Jackrabbit he labeled it “Spaz Slackrabbit” which eventually went on to become Spaz Jackrabbit.

Spaz is Jazz's slightly crazy little brother, who has red fur and wears blue wristbands and boots. He is called into action when Eva asks him to free Jazz from the castle's dungeon and pursue Devan Shell, helping Jazz through the remainder of the game.

Spaz first appeared in the Holiday Hare edition of Jazz Jackrabbit as a decoration in the background of the Bloxonius levels. It wasn’t until Jazz Jackrabbit 2 that he was introduced as a playable character with his own unique moves. There he fought alongside his brother Jazz and his sister Lori.

When development of Jazz Jackrabbit 3 started, Spaz as well as Lori were planned to be playable characters. Though due to the game being cancelled, this never occurred. Spaz also made a small appearance in the Game Boy Advance reboot. In this game he was featured as a non playable character and unlike Jazz his appearance was not changed in the game.

In Jazz Jackrabbit 2 Spaz’s Special Ability is the Double Jump, which allows him to execute another jump in midair to reach higher platforms and secret areas and the Karate Kick which can destroy “speed” and “butt stomp” blocks and deal damage to enemies or other players (in multiplayer mode). 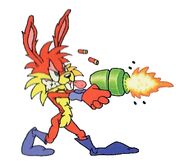 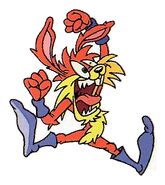 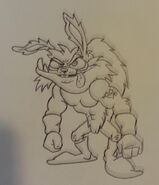 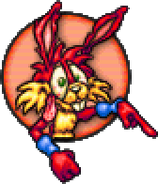 Add a photo to this gallery
Retrieved from "https://jazzjackrabbit.fandom.com/wiki/Spaz_Jackrabbit?oldid=6899"
Community content is available under CC-BY-SA unless otherwise noted.