Queen Earlong is a character and boss from Jazz Jackrabbit 2, being fought at the end of the Dungeon level.

Queen Earlong is the mother of Eva Earlong and the current ruler of Carrotus. When Jazz defeated Devan Shell and rescued Eva the Queen and the King made Jazz into a prince and granted Eva's hand in marriage to show their gratitude. However, when Devan's goons crashed their wedding ceremony and stole Eva's wedding ring the Queen got enraged and threw Jazz into the palace dungeon for his failure in capturing Devan.

Eva sends Jazz's brother Spaz to rescue him from the dungeon and pursue Devan, but when they try to escape the still angry Queen blocks their path, forcing them to push her into a springboard which causes her to crash through the castle's roof.

It is unknown what happened of the queen after this, since she does not appear on the game's ending sequence.

The Queen appears as a elderly, obese blue rabbit woman wearing a red dress and her royal crown on the head. During the fight with her she also carries a metallic shield with a large "Q" letter engraved on it.

Her boss fight is unique in that she doesn't have a health bar to deplete. Instead, the player's objective is to push her back in order to make her fall into the springboards behind her. Her attacks involve screaming to push the player back into the spikes on the left and stomping to make debris fall over the player's head. Occasionally a Purple Bat will spawn on the window over the spikes so be careful. The queen can only be damaged when she's moving or attacking. 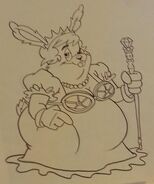 Add a photo to this gallery
Retrieved from "https://jazzjackrabbit.fandom.com/wiki/Queen_Earlong?oldid=7039"
Community content is available under CC-BY-SA unless otherwise noted.