Jazz Jackrabbit 3 (alternatively called Jazz Jackrabbit 3D or simply Jazz3D, subtitled Adventures of a Mean Green Hare) is the unreleased third installment of the popular PC game series, Jazz Jackrabbit. Spearheaded by Dean "Noogy" Dodrill (an animator for Jazz Jackrabbit 2) and coded by World Tree Games, it was developed for the original Unreal Engine technology in 1999. Like many other mascot characters of the late 90s, Jazz would venture into the realm of 3D for the first time.

The game was originally slated to be released in 2000, but since Epic was unable to find a publisher the game was ultimately cancelled. Gathering of Developers, which published Jazz Jackrabbit 2, refused to publish this game due to reportedly low sales of Jazz 2.

Jazz has entered the 3D world and in it can fire his weapon, or charge up a more powerful shot similar to games like Mega Man X. Jazz's arsenal can be expanded using coins collected to purchase new weapons and combine them with Elemental "Dream Cells" to create various weapon effects. In the alpha, only Fire and Ice Dream Cells can be acquired, and usable with two guns (the standard Blaster and the Gizmo Gun). While only Jazz is playable in the current build, Spaz and Lori were also planned to be playable.

Following the events of Jazz Jackrabbit 2, Jazz and his wife, Eva Earlong, settle down in Carrotus Castle to rule the planet and have children. The game ties in with Jazz 2, starting with a battle between Jazz and Devan in a 2D environment, either in cutscene form or actual gameplay. (A story board for one such cutscene was drawn, but never animated.) The premise has Jazz and his wife with kids, which Devan comes to kidnap. Devan is successful in snatching the kids away, taking them into an alternate universe using the Jazz 2 Time Machine. (converted to a Dimensional Machine) This alternate universe turns out to be the 3rd Dimension, and of course, Jazz must venture into the 360-degree world to rescue his children. During the search, Devan uses the kid's dreams against Jazz. 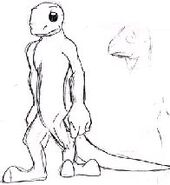 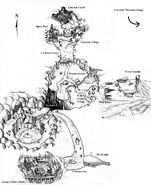 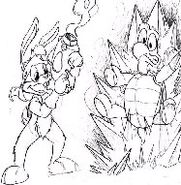 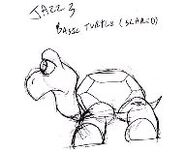