Jazz Jackrabbit 2 produced by Epic MegaGames, now known as Epic Games was released in 1998 for PCs running Windows, and later for Macintosh computers. It is the sequel to Jazz Jackrabbit.

When we last left our hero, Jazz had rescued Princess Eva Earlong from the clutches of the dastardly Devan Shell, foiling the maniacal turtle’s plan to take control of the planet Carrotus. In gratitude, the rabbit king and queen made Jazz a prince and granted him Eva’s hand in marriage. Unfortunately, as the cliché goes, it’s darn hard to keep a criminally insane turtle down for long. Especially one who makes sure to always have a backup diabolical plot in the wings in case his primary diabolical plot is thwarted by some do-gooder superhero. With an appalling disregard for wedding etiquette, Devan and his goons crashed Jazz and Eva’s royal wedding reception, swiped Eva’s 12-carrot diamond wedding ring, and fled. Enraged at her new son-in-law’s failure to defeat Devan once and for all, and socially humiliated by the trashing of her daughter’s wedding, the rabbit queen had Jazz thrown into the palace dungeon.

Now, having used the diamond from Eva’s ring to complete his top-secret time machine, Devan is racing back in time to rewrite a more turtletically correct version of history - one without rabbits! It’s up to Jazz, along with his spaced-out little brother, Spaz, to escape from the palace dungeon, catch up to Devan and stop him before he turns history on its ear.

Just like its predecessor, Jazz Jackrabbit 2 is a 2D side-scroller that incorporates elements of shooting and platforming. The player must venture through a series of levels populated with enemies and environmental hazards that may hinder the player's progress. The player's goal is to reach the level's exit, usually indicated by an exit sign, whilst overcoming obstacles and hazards through the use of running and jumping as well as removing enemies and obstructions through the use of shooting and stomping.

The Player is given a selection of characters to choose from, namely, Jazz, Spaz, and eventually (in the subsequent expansions) Lori. Each character has certain traits that are exclusive to each other. For an example, Jazz can launch himself vertically higher than others, Spaz can double jump, and Lori can dash across the screen whilst eliminating almost any enemy or obstacle in her path. Each Character is equipped with a gun that can fire an inexhaustible supply of projectiles in a straight manner. During the course of the game, however, the player can encounter additional ammunition that can provide the player with greater fire-power and range but with limiting ammo. These ammo types can result in different effects from flamethrowing to firing ice shards (that freezes almost any enemy or object on contact).

Players can also participate in multiplayer. The game's Splitscreen mode supports up to 4 players, where as the Online mode can support up to 32. The game also has a local TCP/IPX network support. In Multiplayer there are five game types that players could participate in, namely, Cooperative (where players could work together in the game's single player campaign), Battle (which is basically Deathmatch), Race (in which the first to complete all laps wins the race), Treasure Hunt (in which the first to collect 100 diamonds and find the exit wins the match), and Capture the Flag.

Jazz Jackrabbit 2 has a bundled level editor called Jazz Creation Station (often shortened to JCS), allowing players to create their own levels. However JCS is not available for Mac users or shareware editions. 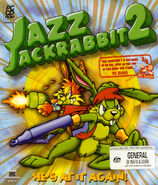 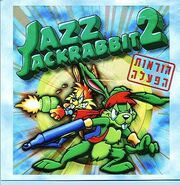