Jazz Jackrabbit is a Gameboy Advance game featuring Jazz Jackrabbit, developed by Game Titan and published by Jaleco with character design help by Cliffy B. Epic Games had no involvement in this game's production besides licensing the character, so this game is considered not canon. It is an attempted reboot of the series, featuring all new characters and a different setting.

The game begins as Jazz, during a routine mission, is captured by the Chameleon army on their home planet. Upon escaping, Jazz decides to retire from his job, but is prevented from doing so by R.A.B.T. HQ, which gives him a new mission to investigate a Saurian attack with the promise of a good money reward. Jazz discovers the involvement of the Turtle Army behind the attack, and upon following them he discovers his old nemesis Dark Shell, whom he believed dead, is seeking revenge on him for his previous defeat.

While this game is a side-scroller Run 'n Gun platformer like it's predecessors, it changes the focus from exploration to action. Jazz can now aim his gun in all eight cardinal directions, being able to fix his aim by firing while standing still. Ammunition for the various weapons can be found during stages, though those are fairly rare. During the stages you can also find money, which can be used in the intermissions between stages to buy ammunition or extra lives.

Unlike the cartoonish weapons from previous games, the weapons here look more realistic, with Jazz basic blaster being changed into a Uzi. Many of these weapons can only be obtained by progressing in the game, some of them being given during the intermissions. Aside from weapons Jazz now has access to the new Carrot Grenades, which work much like the grenades in the Metal Slug series in that they can be thrown at enemies but come in limited supplies.

Unlike other Jazz Jackrabbit games, this one isn't divided in chapters, likely due to it being made for a portable console. Instead you only have regular levels with three areas each which all end on a boss battle. When playing on the Beginner difficulty most of the trickiest levels are skipped over. 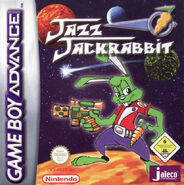 Europe cover
Add a photo to this gallery
Retrieved from "https://jazzjackrabbit.fandom.com/wiki/Jazz_Jackrabbit_(GBA)?oldid=6917"
Community content is available under CC-BY-SA unless otherwise noted.