Jazz Jackrabbit is a platform game developed and published by Epic MegaGames. It was released in 1994 for PCs operating DOS, with subsequent Macintosh and Microsoft Windows releases in 1995 and 1996. It was one of the first games to bring the side-scrolling platformer style - common on gaming consoles - to a PC audience.

Jazz Jackrabbit, developed in the Netherlands where Arjan Brussee then lived and in Cliff Bleszinski's mother's house, was greatly inspired by the Amiga game Zool and the ongoing success of video game classics (such as Sonic the Hedgehog and Mega Man) defining the platform game genre in the 1990s market, and was initially considered to be a pastiche of Sega's Sonic the Hedgehog in the computer world. The game did not manage to reach the popularity of Sonic, but did acquire a certain fan audience due to its fast-paced gameplay, advanced graphics and notorious acid jazz level soundtracks.

In 1995, PC Format magazine named Jazz Jackrabbit "Arcade Game of the Year". Two other releases originated from it: a sequel named Jazz Jackrabbit 2 in 1998, as well as a reboot on Game Boy Advance in 2002. The commercial success of the game kickstarted the career of its co-creator, Cliff Bleszinski, who would later go on to be a key force behind Epic Games' blockbuster hits Unreal Tournament and Gears of War, among other titles.

On November 30, 2017 the game was re-released on GOG.com along with Jazz Jackrabbit 2, with support for Windows, macOS, and Linux.

Jazz Jackrabbit was released in 1994 for the Personal Computer (PC), featuring very fast gameplay for its time, secret levels, and 3D bonus scenes. It contained six episodes. Later that year Jazz Jackrabbit CD was released, containing the original six episodes plus three more, and the added feature of selecting bonus stages from the main menu. It was awarded the Arcade Game of the Year prize by the PC Format magazine.

Jazz Jackrabbit evolved from a platform game in the making by Digital Dimensions. It originally starred Wubbo Ockels, the first Dutch astronaut to go into space, but it was later changed into the Jazz Jackrabbit character (a green rabbit with a big, blue gun, in case you haven’t already noticed), which Cliff Bleszinski designed. They had decided that the space theme had been overused in videogames at the time so they wanted to do something different.

The game is set in a fantasy world based on Aesop's "The Tortoise and the Hare", in which the enmity between tortoises and hares continues even after three thousand years. An evil mastermind tortoise named Devan Shell begins conquering planets in three different galaxies, suppressing any native confrontation. One of such planets, Carrotus, is home to a peaceful hare kingdom that, once confronted by Shell, is able to provide enough resistance to fend him off. Enraged by his loss, Devan decides to kidnap Carrotus princess Eva Earlong and hide her on a distant airbase of unknown location to weaken the hares.

In response, the king chooses to send Carrotus' hero Jazz Jackrabbit, who carries a blue LFG-2000 gun, to various planets conquered by Devan that might contain clues to the location of Eva's imprisonment. As Jazz travels through different worlds, he gains new weapons and meets new enemies in his pursuit to rescue the princess and save Carrotus from Devan Shell and his army of Turtle Terrorists.

The initial game is divided into six episodes (with three more episodes added subsequently). Each episode has three planets (worlds); with every planet itself consisting of two levels (some planets have an additional secret level). The final level of every episode features a boss that the player must deal with in order to complete the level. Episodes are tied by a single storyline usually progressing after each episode is finished.

Gameplay mechanics in Jazz are very similar to Zool's, with the exception of not being able to destroy the enemies by simply jumping at them (which was not added until the second game). Jazz will run faster and jump higher the longer he runs, avoiding chasms that might lead to harmful objects. Unlike other platform games, however, there are no abysses and every level bifurcates into subsections that might lead to valuable items (such as weapon pick-ups, score items, etc.) while the direction of general progression is hinted at with occasional arrows. Jazz has a life bar that changes in color based on how much health Jazz has remaining. Jazz can withstand a limited number of hits (5 on Easy mode, 4 on Medium mode, 3 on Hard or Turbo mode) from harmful objects before losing a life; one hit's worth of health can be restored by picking up a carrot. Lives can also be accumulated to the maximum number of ten. When killed, Jazz starts from the level beginning or any checkpoint sign was reached and shot before.

Items that the player can pick up usually resemble food, computer hardware components or other familiar shapes, and give 100 score points each. There are also several beneficial pick-ups in the game: a "force shield" that protects Jazz from one or four hits, a sidekick in form of a bird that shoots enemies, a hover board that allows flight in the air, rapid fire/super jump bonuses, a temporary "speed-up" and invincibility, as well as extra lives. Weapons also vary in numbers and consistency and include (besides the initial blaster) bouncing launcher grenades, flame bullets, bi-missile projectiles and TNT sets. Large sets of ammunition can only be collected by being shot from their enclosure.

The first game features a timer that starts a number of minutes at the beginning of each level (10 minutes on Easy mode, 8 minutes on Medium, 6 minutes on Hard, and 4 minutes on Turbo) and counts down to zero; on Hard and Turbo, another countdown appears at the top of the screen when there is less than a minute left, and if time expires, Jazz loses a life. If Jazz reaches and shoots the finish sign before time runs out, the player is then provided with additional score points awarded for the remaining time and a perfect score if he picks up all items and/or deals with all enemies. If Jazz has collected a big red diamond, he gets to enter the bonus stage. In these stages, animation switches to a pseudo-3D (third-person shooter) of Jazz as he runs on a speedway with the purpose of gathering as many blue diamonds as requested before time runs out, while obstacles try to stop him or slow him down. If the task is accomplished successfully, the player is provided with an extra life.

Aside from bonuses, Jazz also features secret levels that can be accessed in specific areas of other levels once in every episode. Secret level signs feature the question mark instead of Devan's head portrait that must be shot. The current level is then considered completed and the secret level embarks. Levels themselves consist of an enormous "grant" area with numerous weapons and items to pick up. One level, however, features a mini-boss, while the player assumes control of Jazz in his sidekick bird form. Secret levels also feature a count-up upon completion that provides the player with extra score points. In the C-episode there is a secret level with Jazz in the form of a lizard. 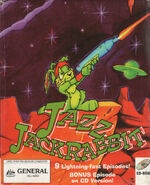 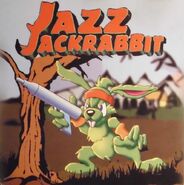 CD-ROM Cover
Add a photo to this gallery

Retrieved from "https://jazzjackrabbit.fandom.com/wiki/Jazz_Jackrabbit_(1994)?oldid=6913"
Community content is available under CC-BY-SA unless otherwise noted.