Jazz is always at odds with his nemesis Devan Shell and much like console counterpart Mario from Nintendo, always having to save his favorite damsel in distress, the princess Eva Earlong.

Jazz Jackrabbit is a 3'1", 90-pound anthropomorphic green rabbit. Strictly speaking, his surname, Jackrabbit, implies that he is a hare, but "hare" and "rabbit" are used interchangeably in the game. He comes from the planet Carrotus, and is a cross between Rambo and Bugs Bunny. He also has a red younger brother named Spaz, who seems to have a mental illness, and a yellow athletic sister named Lori. Together, they face the evil forces of Devan Shell, a nerdy, but vengefully sinister mad scientist turtle.

Jazz is in love with, and eventually marries the lovely Eva Earlong. His favorite food is carrot pizza, and his favorite book is Watership Down.

Jazz was thought up in late 1993. The creator’s original plan was to make him an astronaut. However during that time the space theme used in video games and other media had been so overused that it was decided that something else should be done. The decision was then made for Jazz to become a green rabbit.

An evil mastermind tortoise named Devan Shell begins conquering planets, suppressing any native confrontation. One of such planets, Carrotus, is home to a peaceful hare kingdom that, once confronted by Devan, is able to provide enough resistance to fend him off.

Enraged by his loss, Devan decides to kidnap Carrotus princess Eva Earlong and hide her on a distant airbase of unknown location to weaken the hares. In response, the king chooses to send Carrotus' hero Jazz Jackrabbit to various planets conquered by Devan that might contain clues to the location of Eva's imprisonment.

Jazz chases Devan Shell through time, in order to retrieve the ring with which he planned to wed Eva. Jazz's brother, Spaz, and later his sister, Lori, are introduced and help him stop Devan.

Note: The following is based on the script for a unreleased game, and thus not canon.

Jazz and his wife, Eva Earlong, settle down in Carrotus Castle to rule the planet and have children. Devan then comes to kidnap Jazz’s wife and kids. Devan is successful in snatching the kids away, taking them into an alternate universe using a Dimensional Machine. This alternate universe turns out to be the 3rd Dimension, and of course, Jazz must venture into the 360-degree world to rescue his children. During the search, Devan uses the kid's dreams against Jazz.

Jazz Jackrabbit is portrayed as a bandana wearing, gun toting rebel. He has dark green fur with a lighter green fur covering his torso and mouth area. He wears a backpack and always has his signature LFG-2000 gun of which his catchphrase spawned from.

"When you're a little rabbit, carry a BIG GUN!”

Jazz is portrayed in a way that differs greatly from his original appearances. In this game Jazz is seen with a red shirt, navy blue pants, and an orange/green spotted gun. Jazz's occupation was also changed from a soldier of fortune to a hired mercenary. 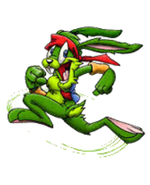 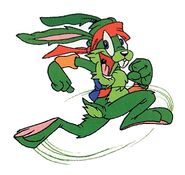 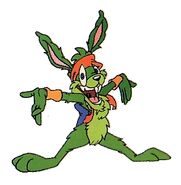 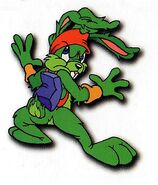 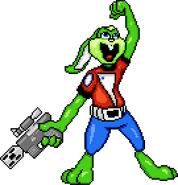 Add a photo to this gallery
Retrieved from "https://jazzjackrabbit.fandom.com/wiki/Jazz_Jackrabbit?oldid=6860"
Community content is available under CC-BY-SA unless otherwise noted.